Today was the first day of the Sustainable Cleveland 2019 summit, hosted by Frank Jackson in downtown Cleveland. It was a mix of speakers, round-table discussions, breakout sessions and the usual other summit/convention type activities. We are continually reminded that this is not just some conference to be forgotten but instead acted upon later on. Time will tell if that comes to fruition and as I wrote before will require input from everyone in the community, including you Clevelanders out there reading this.

To start, here are some neat facts I learned today:

Aside from the speakers we also began the Appreciative Inquiry process, using techniques refined by our moderator David Cooperrider. We’re still in the “discovery” stage of the AI 4-D cycle (below), basically a time to figure out who is there, what individuals are good at and what in the past has worked well and can be built upon. The entire philosophy of the method is to focus on the positive aspects of change (what could be) instead of waiting until things go wrong and trying to fix them (what was). While it can produce some ideas for how to really enact the change, I am only expecting this summit to be a motivational type of event; an event that really makes people want to keep going with developing community and talking to their government leaders. 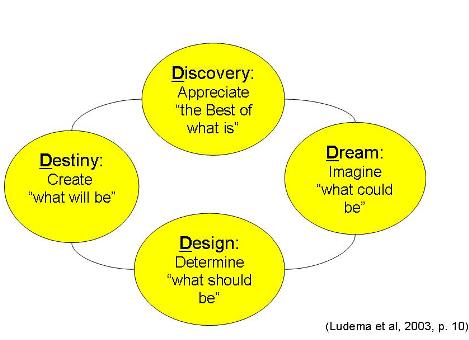 And although I have enjoyed my time so far, I’d like to point out some things I’m a bit skeptical about and questions that are yet unanswered:

So far I have met some wonderful people, which if it came down to it, would be reason enough for me to attend this summit. Making connections with people that are enacting change in Cleveland really allows me to step outside the bubble of my world and to see what is important to others. In some cases technology doesn’t factor into their thought process at all, something that is hard for me to imagine. On the same note though, some of those I have met and am sure to meet more of are spectacular at working with people, something that is also not my strongest suit. I think there can be a mutual exchange of ideas among all of us that will allow me to grow as a person and as someone that will hopefully be able to drive change in my hometown.

What about you? Do you have any questions about the first day of the summit? Are you attending the summit and have somehow found this page? What is your take on the summit thus far? Let me know in the comments!