I proposed a talk to the Hackaday Superconference yesterday titled,  “Improve your circuit toolbox: Simple designs that will save your next product”.

While I don’t know if the talk will be accepted, I thought it could be a good discussion regardless and thought I could write out some thoughts here. I haven’t been writing much lately and wanted to stretch my muscles again, so why not?

The first circuit on that list will be an indicator LED.

Yep, that simple of a circuit. Allow me to share a diagram: 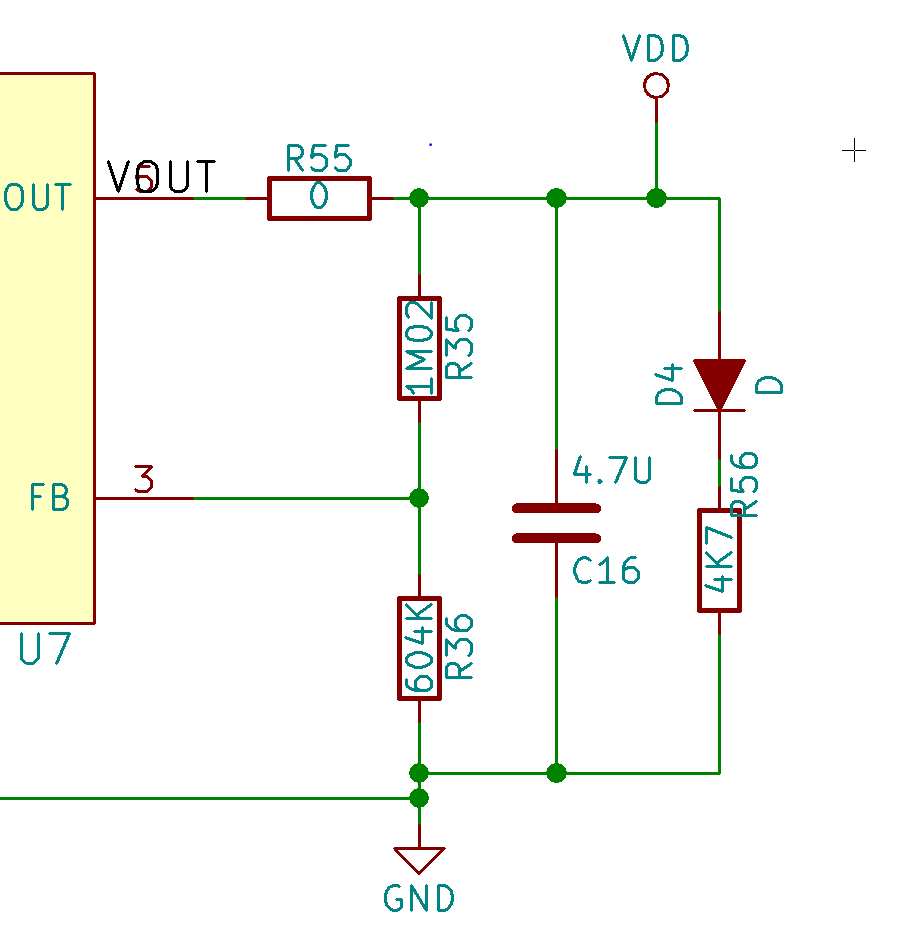 The power of the blink

All this circuit does is light up. When the user inserts batteries and enables the circuit via a physical switch, the power flows through the regulator and lights up D4 which is a red LED. That’s it.

The crazy thing about this circuit? The LED indicator was not implement until rev 3 of the design! Prior to implementing this I only knew the status of the board when I put a DMM across the power terminals.

Throughout the testing of the above project and in many other projects, I have shorted things out by accident. When there is a power indicator LED on board that starts to blink because I’m dragging down the power rail, it’s easier to stop doing what I’m doing. If that isn’t there, sometimes the only indicator is another part of the circuit communicating intermittently or the switching converter starting to whine.

Arduino users will know this one well, there are LEDs that are attached to the serial lines. When you’re programming the board or transmitting back via the serial console, the indication is obvious. 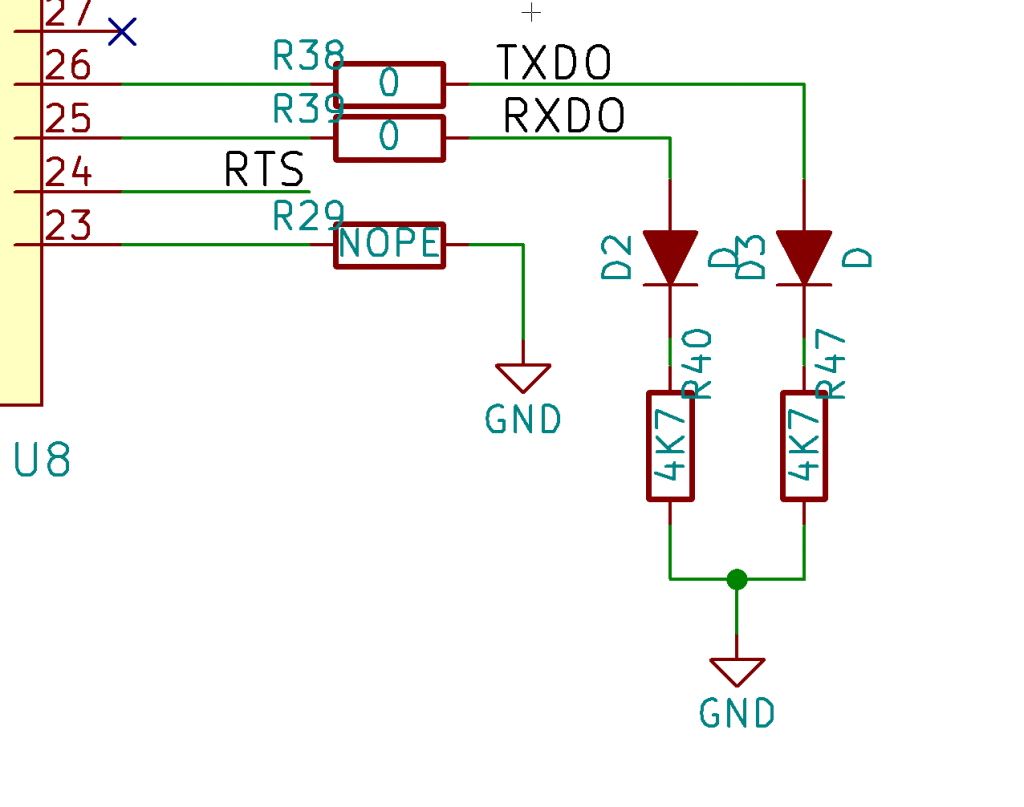 You need to be careful with your serial lines, ensuring your LEDs don’t pull too hard on the lines. Set your current with the proper sized resistors so you don’t mess up the edges of your serial lines. When in doubt, take them out.

You don’t need to end up populating these parts when you go to production. Your low power product might not be able to spare the milliamps of current. You can either “turn down” the resistor brightness by using a higher value resistor or you can leave the LED out entirely when you’re certain you have a stable product.

Your eyes are test equipment

While these circuits are super simple, it effectively re-purposes your eyes as test equipment. There is a high amount of light sensitivity in the human eye and even small changes like brightness difference or flicker will showcase that “something is different” if not “something is wrong”.

LED indicators will help you troubleshoot your next product. Be sure to add them to any/all of the following:

As LED lighting and nearly all aspects of energy saving and/or renewable energy come into focus in the real world, we need to keep an eye on the economics of it all. You know the big players are. Big attention means big money and as you can see, lots of people want a slice of the action.

A quick synopsis of the above article could be: LEDs don’t work on their own…people need to buy other stuff. I have already written about one such component, the LED driver, in the past few weeks. Other than touching on drivers, the article also mentions other aspects of LED design including heat management, logic control and LED internals. Each of these parts of the whole design will need to ramp production in order to introduce economies of scale on each part level. The most striking number from the above article is that for every dollar spent on a LED (in this case a HB LED, used in commercial and residential lighting), the user must also spend $2-5 on auxillary components. This means that as the use of LEDs increase, so shall the semiconductor interest in driving those LEDs.

Another sign of this is chip makers entering traditionally non-lucrative markets. National Semiconductor has recently added a power management line of silicon aimed at taming the fickle nature of solar panels. When Nat’l enters the fray, you know they have projected some serious growth. So while my optimism for the entire subject of solar power is restrained, things like the new solar chips and the LED articles mentioned above make me happy. Hopefully we’ll see more news like this soon.

An article about a new LED controller from Linear Technologies was the inspiration for this post. I decided upon seeing this article that it could be a good way to talk about a theoretical LED lighting scheme in your theoretical DC powered home.

One key I’ve learned to engineering is not trying to re-invent the wheel every time you start a project. In that spirit, I thought I would show case a new Linear Tech part that would fit well into an all DC powered home.

The basic idea of this circuit is to create a buck-boost converter, in order to pump more voltage into an array of power hungry (yet hopefully efficient) LEDs. Also there are other options on the chip to allow it to be even more versatile and act as a buck, boost, flyback or SEPIC, depending on setup and peripherals. Even though the listed applications are more for driving headlights and industrial applications (powering detection LEDs on an assembly line and then using a photo detector to determine changes), I believe this could work in a house wired with DC power in the walls. I believe a

Looking at the schematic on the EDN site, also directly linked here,  you can see that there are some external components that are required for this part, but are mostly in the realm of resistors for detecting shutdown currents or providing feedback to the circuit. A look at page 8 of the schematic shows just how complicated this circuit is and that you are probably saving yourself a good deal of trouble by using this instead of the individual components.

An added bonus for this new part is the dimmer control, with analog ratios of up to 10:1. That means that in our theoretical DC powered home of tomorrow (eat your heart out, Disney World!), we could wire in a simple dimmer with minimal cost, using an oscillator, a PWM generator, and a potentiometer built into a wall switch (and peripherals).  The dimmer control would also allow us to bring down the output current (via PWM_OUT) of the chip in order to save power.

The efficiency of this part can reach 94% in an inductive boost mode. Assuming there are no restrictions on some EMI emmitance issues and size of the parts, this could be a very good option for an LED lighting fixture in a home (with even simpler implementations also possible). Maybe one day we’ll see some wall fixtures with similar parts in them.

AC power vs. DC power: Both are necessary in our everyday lives and switching between the two causes a great deal of strife in electronics. Why do we need both?

As some of you may or may not know, there was a long standing battle between the two types of power raging back in the 1880s between two giants. The proponents of this war knew that whoever won would determine the future of the power distribution in the United States and possibly the world. In the first corner was Thomas Edison and his company that would eventually become General Electric; Edison wanted the world to run on DC. In the other corner was Westinghouse Corporation, funded by George Westinghouse and led (intellectually) by Nikola Tesla. Westinghouse represented AC power and would be the eventual winner. You can read more about the battle HERE, but I thought it would be interesting to point out that this battle eventually became a political one. Edison even started fighting dirty, secretly funding the invention and use of the first electric chair powered by AC, in order to give some bad press.

AC of course won out over DC as the power distribution of choice, mainly because of the ability to have large generators in a central location and then transmit the power efficiently over power lines to homes and businesses. DC would have required local generators on every street or even every home, which was not possible nor economically viable at the time.

Hang on a second though…a DC generator on every home…sounds familiar…where have I heard about something like this before? Oh right, solar power. However, even more interesting than the fact that solar power produces DC power output is that any kind of storage will have to be in DC. So THAT means if you have any kind of renewable energy resource on your premises (wind, geothermal, any kind of generator which will have an AC output) and it’s not continually supplying power to your home, you will likely need to store it somewhere (assuming you are not selling power back to the power company, which is the case in some areas still and a must in the remote areas). Further, barring any possibility of storing AC power (a huge inductor?), you will need to store that power in DC. So let’s look at a theoretical wind turbine on a theoretical property:

That’s a lot of steps! Not only are there a multitude of steps to convert wind into air conditioning (heh, the electrical way…the natural way is opening the window), there are lots of places that you will be losing energy to inefficiencies. These occur in the power generation (motors have friction), the storage in the batteries (heat and losses due to chemical impurities in the wet cells), the AC to DC conversion and the DC to AC conversion (both processes lose energy to heat in the electronics). All told, it’s not hard to see why this is not the preferred method of powering ones’ home.

So now the real question: Can we take out some of these steps?

Other articles on this site will deal with improving efficiencies of each of these steps, but the simplest method for improving overall efficiency would be to remove one or more of those steps. The way I see it, one of these ways would be to convert a power scheme in a house. Let’s look at all the ways a DC power system in a house could be beneficial or detrimental to ones’ living situation:

Benefits of using DC instead of AC:

So the final question comes back to that posed by the giants of the 19th century: AC or DC power? Well, really the answer will be both, as history has shown. Perhaps over time we’ll see a shift back towards DC power as devices continue to shrink and manufacturers don’t want to include bulky transformers or as people hopefully begin producing their own power at home; but one thing that is for certain is this battle will continue raging for a long time and hopefully we’ll help renewable energy find it’s place.

I welcome any and all comments on this idea and if you know of something being developed similarly, please let me know!

“If I have been able to see further than others, it is because I have stood on the shoulders of giants.” ~Sir Isaac Newton